People have lots of different opinions about Hillary Clinton.

My personal belief is that the world would be a better place with more women in charge. I think a competent female president would be a good thing for the world.

Male leadership has gotten us into this mess. Environmental destruction, predatory economics, unequal justice systems. These are all effects of the unbridled greed of our leadership.

Maybe a female president can be motivated by something other than greed and could do some good in the world. 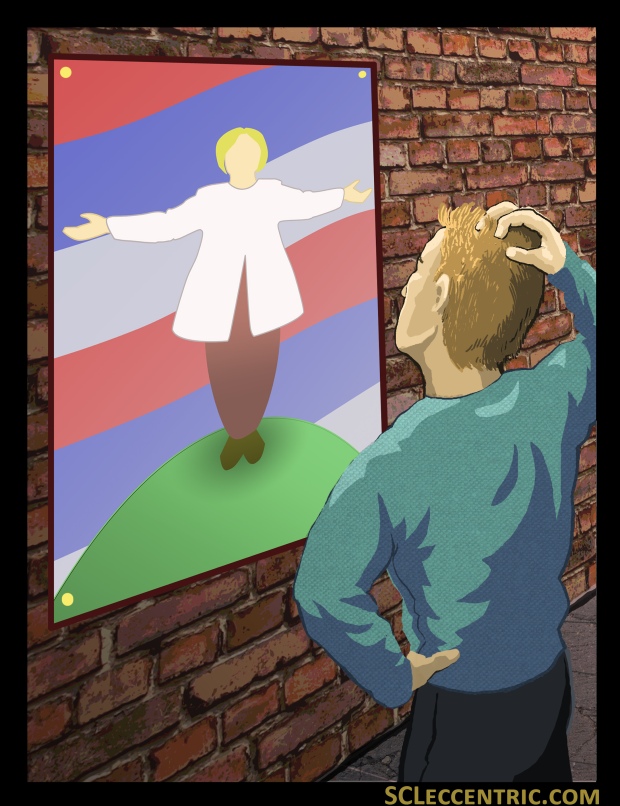 To quote Arrested Development: “Her?”

I did this illustration a week ago, when the California primary just happened. Actually, I did the illustration that is on the wall first. But it looked too much like I was paid by the Clinton campaign, which I wasn’t. If I’m going to do propaganda for a presidential campaign, they better be paying me a thousand dollars an hour. You know they have the money.

So I modified the illustration so that a guy was looking at the p0ster and scratching his head. It needed to be more cynical. Genuine excitement for a president is off-brand for SCLeccentric.

As much as I support Hillary, I still feel hesitant to express any enthusiasm. Maybe cynicism is yet another thing I’m addicted to. Maybe I’m afraid to be honest.

So I’m putting the cynicism aside. I support Hillary Clinton for president. She is the most competent, she has good ideas, and she is the progressive leadership that humanity needs right now. We need a president who will look forward and find solutions, not wallow around and find scapegoats.

SCLeccentric is endorsing Hillary Clinton for president and both Kamala Harris and Anne Kirkpatrick for Senate. Let’s get as many ladies in there as possible!

One thought on “Her?”