What’s Been Distracting Me Lately? Cichlids!

You gotta have distractions in this life. God forbid I get any artwork done.

Lets look at my latest distraction. 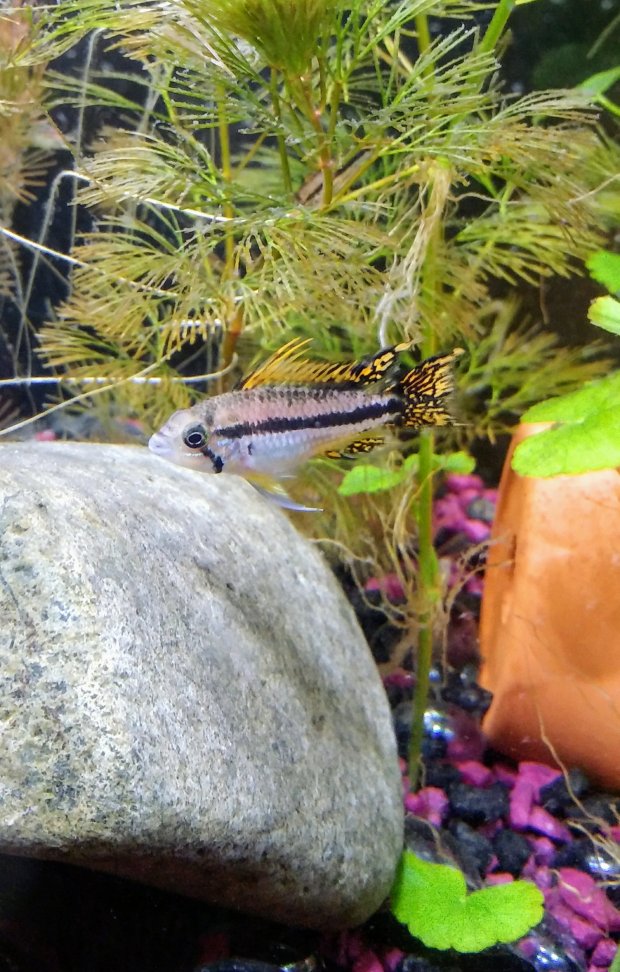 This is Martin, big bossy boy of the tank.

I got a new aquarium! What’s in it? Fish!

Today I want to tell you about the Cockatoo Dwarf Cichlid, apistogramma cacatoudes.

We got four of these guys on MLK Day, and named them Martin, Luthor (RIP), King, and Junior. At the time we bought them, they were just fry, so we got them without being able to tell which was male and female. This is important if you want them to breed.

I was very excited to get these fish, as I have never tried breeding them before. Its a work in progress, but it’s fun already.

These are freshwater South American fish from rivers like the Amazon. They are a little tricky to keep, but very fun to watch.

Most people probably wouldn’t think fish watching is fun. It actually is. There are some boring fish, but if you give them a lively environment, you get to watch all their interactions.

Here’s an example. The females, King and Junior, were fighting constantly. Tail slaps, pecking, chasing. So I removed King, the most aggressive one. I put her in a quarantine tank.

As soon as I took her out, Martin got super agitated. He was swimming around looking for her for hours. His coloration said he was distressed. Most fish can’t focus for that long, but he shows real desires.

The thing about Cichlids is they are “thinking fish”. They stop and consider what’s going on, they interact with each other, and they recognize their owners. It makes these more rewarding animals to keep.

And they’re really good at distracting you from your work.😉

Have you ever kept Cichlids or other fish? Tell me all about it in the comments.

← Newts!
From the Fish Tank: Apistos with Eggs! →

3 thoughts on “What’s Been Distracting Me Lately? Cichlids!”